Samir “Sam” G. Hanna, RPLS, the Founder and Chief Executive Officer of Surveying And Mapping, LLC (SAM) has announced his retirement from the daily management of the company. He will retain his position as Chairman of the Board and will continue to serve as an advisor to the management team. 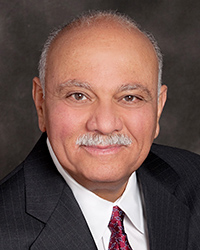 Mr. Hanna originally founded Surveying And Mapping, Inc. (SAM) in 1994, with a modest beginning in the Austin, Texas region. Over the next 22 years he led the company through a period of exceptional growth to a leading position as one of the largest and most

successful companies in the surveying and mapping industry. Today SAM has hundreds of staff in 24 offices and operates across the U.S.

According to Mr. Hanna, “Building this company has been a fantastic adventure over the last 20 years and I’m extraordinarily proud of what we have accomplished. It has been a privilege to lead such a talented and dedicated team to the success we’ve achieved. As I move into retirement, I have absolute confidence that the company is in exceptionally good hands and poised for further success going forward.”

Over the firm’s history Mr. Hanna was very successful at responding to market trends and diversifying to meet evolving demand. After the company’s founding he quickly expanded core services to include Aerial Mapping, Subsurface Utility Engineering (SUE), and Utility Coordination. Subsequently he broadened services further to include Airborne, Mobile, and Terrestrial LiDAR, Hydrographic Surveying, and in 2011 established a wholly owned subsidiary SAM–Constructions Services (SAM-CS) to provide Construction Phase Services. In 2014 SAM, Inc. completed an investment agreement that brought new partners into the mix and at that time the company was renamed Surveying And Mapping, LLC (SAM). In 2016 SAM completed an acquisition of So-Deep, Inc., a nationally recognized leading SUE company, extending the services and geographic reach of the SAM Companies even further across the Southeast U.S.

Mr. Hanna’s photo can be downloaded at: http://www.sam.biz/sites/default/files/Sam-Hanna-1200.jpg